Should DJs & Bands Pay To Get Gigs?

So a lot of the music blog sites and magazines have recently been covering the outbursts of DJ/Producer Mat Zo.  He’s been raging about all sorts of things that make him unhappy in the industry, but one of his tweets in particular stood out to me.  It was mentioning that DJs often pay to get the better headline slot in a festival: 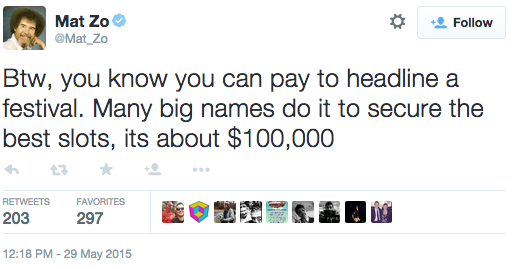 Now of course it’s not exactly shocking news to me; I’ve been in this industry far too long, and know of plenty of bands who’ve had to fork out to support a major act, and I’ve known plenty of DJs who’ve been asked to pay an upfront fee in various forms (travel, hotels, ticket sales, and even a “deposit”) to secure a gig.

But it seems as though this has slowly become rife, particularly in the UK where it seems to have started in London with small-time promoters desperately trying to make a gig look successful by taking advantage of having an abundance of wannabe DJs around them, and pressuring them into selling tickets in order to cover their own booking fee.

Should acts really have to pay for their own gigs?  Hell no!  This is one of the reasons that I all-but-gave-up performing live.  I still love performing when I get the chance, whether its with a pair of decks or a full live setup.  I’m happy to play for free (or at least expenses) if it suits me too, but when a few years ago I started getting told by UK promoters what kind of music to play, and their expectations were increasing too (asking me to bring X amount of paying guests, or even asking me to sell tickets as a way of earning my fee), I knew the time had come where the bubble had burst and the scene had become too saturated.

This morning, a producer friend of mine – eSQUIRE – posted a simple question:

A simple question, yes, but one that took me by surprise a little, because I knew it was rife amongst the big league of headliners, and I also knew it was rife in the London scene, but it’s obviously started to spread around to the UK, and apparently further afield too.  As it turns out, these are a few of the responses:

So it’s pretty much taken as the norm these days, and that just can’t be a good thing.  I’m always one of the first people to admit that there isn’t a huge amount of technical skill required to become a DJ, but there definitely is an art form to the process of track selection and reading crowds.  This is even more important when it comes to the support act or warm-up DJ.  At the peak of my DJing career, my sets were usually around 128BPM and started at about 2am.  It was shocking the amount of times I’d arrive at the club and the DJ before me was blasting out some huge electro tracks at 132BPM, meaning the crowd were already peaking and starting to tire, before I’d even had a chance to do my part of the job.  This was during a time where club promoters were just promoters, and DJs were just DJs.  Here’s another comment: 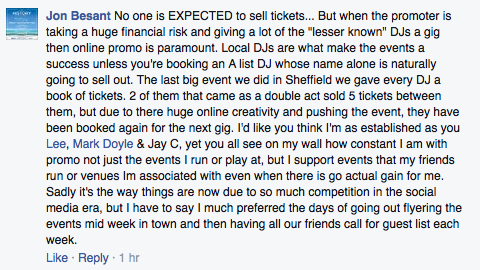 Now while I’m sure that Jon isn’t trying to suggest that this should be the case and taken as normality, I actually disagree with a few of the things he mentions.  First of all, whilst any promoter is making a financial risk, this is part and parcel of the job they chose.  This is exactly why promoters should start small and build on a quality brand, developing key talent and a solid fanbase for that talent, so that the risk is far smaller.  When I first started clubbing, we didn’t go out to see a specific DJ, we went to a specific club night because we knew that they’d put on a great night with great DJs regardless of their level of fame.

Let’s face it, most DJs aren’t exactly the brightest of stars when it comes to business acumen, so why should they ever be involved in something like marketing a major event?  If I were a club promoter (let’s hope I never am because I’d suck!), then I would want the best possible marketing and PR strategy that builds organically.  I wouldn’t want to rely on viral campaigns or flash-in-the-pan ticket bursts, I’d rather focus on artistic output, confident that the people paying money get their moneys worth.  Wayne puts it perfectly here:

So… I guess there’s a lesson to be learnt here.  We may live in the social media era where people can make a 20 second video and become famous for a day, but there’s no shelf-life to that.  Promoters; by all means, get your DJs to sell tickets, but don’t expect a loyal following of any kind.

I’ve turned down several gigs in the last year or two because promoters have wanted me to bring paying guests or sell tickets or whatever.  The thing is, I’d actually be doing that anyway, because of course I would want all of my gigs to be a success, and of course I’d want as many people there as can be, but the moment you tell me that its part of the conditions of a gig, is the moment I’ll tell you to fuck right off.